One frustration I have when working with printables is the inability to print a foil or glitter look.  I know that seems silly, but it looks so good on my computer and then it’s so dull when printed.  So today we’re going to look at a new media not used in the box before, and see how to use it in not one, but THREE new ways!!

So of course I’m talking about DecoFoil — one of the new loves of my life.  It’s available in most local craft stores and also on Amazon.  We are going to use this in conjunction with the DecoFoil Adhesive Pen AND the Chemica FirstMark HTV from SewingMachine.com. 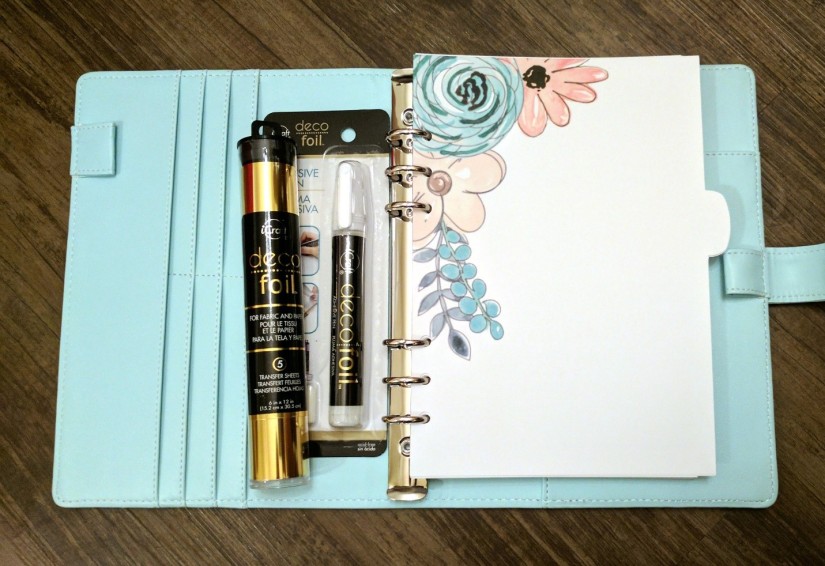 The basics of using DecoFoil is that it’s a thin foil that you can lay on top of a multitude of media that it will adhere to.  You don’t cut the foil itself, you just cut your design (or draw your design with the adhesive pen) and lay the foil on top, apply heat and peel the foil back.  We’ll go through it step by step.

First, we’re going to work with the FirstMark HTV.  I specificually chose this HTV because the foil will adhere to it just as it would the DecoFoil adhesive sheets.  So yes, you can buy adhesive sheets made specifically for using foils like these, but why purchase a specialized product when you can have a dual purpose product?  Now if you decide that you love using foil, then I could see the specialized products, but I wanted you to know the reason for using the HTV today.  Just as an FYI, I find the clear foil adhesive harder to work with since it’s also harder to see.

So first, size your design to your project.  The first project we’re going to work on in this tutorial is apply HTV to paper.  That’s right, you can apply HTV straight to paper (exciting, right?).  We’re working with one of our planner dividers.

This hand-lettered design was shared with me, but through some research I found out that it was a paid file.  I know I said that it was a freebie and that I would share it with you in the tutorial, but I can’t in good conscious do that.  SO, what I do have for you is a whole list of FREE SVG HANDLETTERED FILES over at By Dawn Nicole!!

Move the planner divider away and flip your design just like you normally would working with HTV.  You’ll also want to make sure you update your Design Page settings to be 12” x 7” to match the size of HTV that was included in your box.

IF YOU ARE CUTTING THE HOT PINK FIRSTMARK, first feel how thick it is compared to the other smooth HTV’s you have used.  I cut this using the Flocked HTV settings and it came out fine.  BE SURE YOU DO A TEST CUT (OR THREE) TO MAKE SURE YOU HAVE YOUR CUT SETTINGS CORRECT.

I cut the black, so now the next step is to go ahead and adhere it to the cardstock.  You literally do it the same as you do for a garment — throw it in your heat press OR use your household iron.  FirstMark is a Warm to Cool peel, so just let it cool down before peeling off the clear carrier sheet. 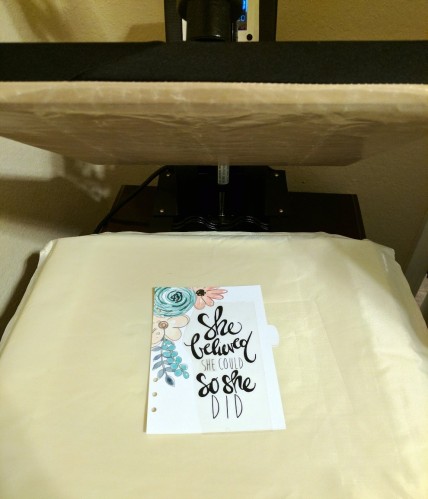 Once you let it cool, peel the carrier sheet and ta-da!  Now under normal circumstances, there’s not a real benefit to using HTV on paper, when you could print your design or use adhesive vinyl for a 3D effect.  But we’re going to take it one step farther today.

Unroll your gold DecoFoil and cut a sheet down to fit over your HTV design.  It doesn’t have to fit the whole planner divider, just the HTV.  Be careful that you only grab one sheet, they are thin and it’s easy to grab two.

With the HTV covered with foil, go ahead and apply heat.  I used the same settings on my heat press that I did for the HTV.  If you are using a household iron, be sure to have a barrier between the foil and the iron.  You can sometimes get away with not using a Teflon sheet or parchment paper between your iron (or heat press) and the HTV, but that isn’t the case for foil.

After heating, allow the foil to cool, then remove.

One of my favorite parts, besides the reveal, is that you can save the foil that didn’t adhere and use it again!  Also, if you have any parts of the HTV that doesn’t take to the foil, simply place a scrap of foil over the exposed HTV and press again! 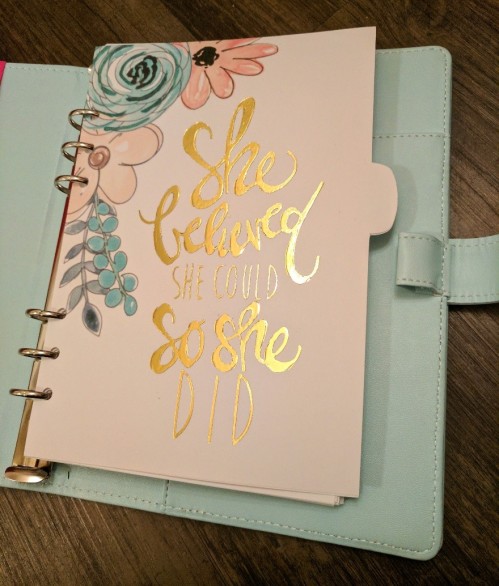 So now that you have the basics of using foil, you can do it again and again, it’s the same process!  So now break out the DecoFoil Adhesive Pen.  Be careful when you open the package or you’ll lose your chiseled tip.

There are directions on the back of the package, so look that over to get a general idea.  But you basically treat this like you do those paint markers — hold the tip down until the tip is saturated with the adhesive, then write on your surface.  It’s a little harder to see, because it’s clear, but it’s there.

You can now do the same thing that you did with the HTV, by layering the foil on top of the areas that you wrote the adhesive onto.  Press and peel and you’re done.

See, I told you that you can use the scraps!!  Now mine didn’t turn out so well, but I let my adhesive dry for too long.  So keep that in mind, follow the directions and let it dry about 30 seconds before pressing. 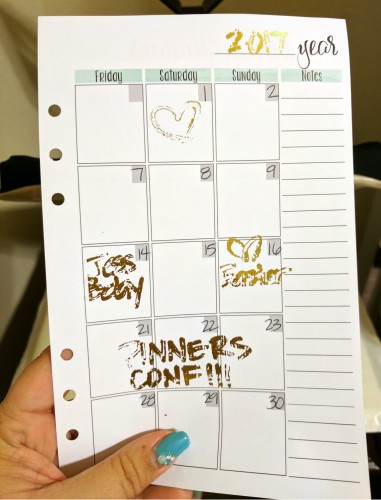 So I know you are thinking, we’ve covered two projects, what is the third?  Using foil on a garment of course!  Well, in this case, it’s going on our planner bands and the faux leather paper, but it’s the same concept.  I cut scraps to fit over the “girl” part of the HTV -– carefully avoiding the rest of the black because it will stick — then press my planner band again. 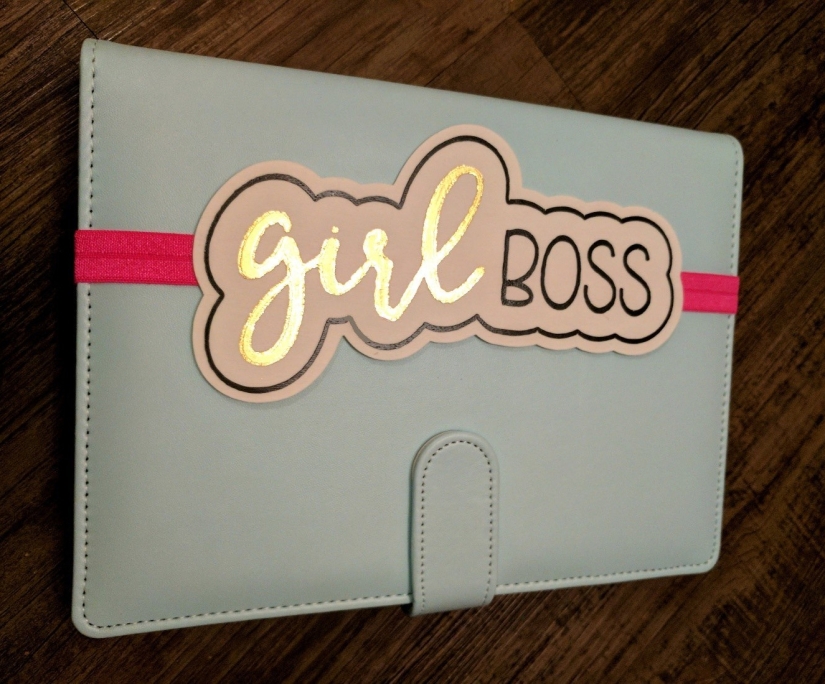 View all posts by Becky Dykes